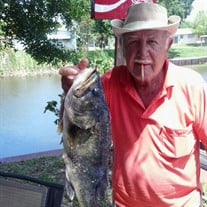 Charles E. “Bud” Miller, 86, of Hoopeston, IL, passed away at 6:15 P.M. Friday July 24, 2015, at his home. He was born August 28, 1928, in Rossville, IL, the son of Everett Peyton Miller and Anna Clementine (Bell) Trent. He married Ruby Irene Shaw on June 3, 1966, in Hoopeston, IL. She preceded him in death on December 5, 2013. He is survived by one daughter, Lealoni (Tony) Gress of Hoopeston, IL; two sons, Edward (Susan) Miller of Oakwood, IL and Kevin (Rebecca) Miller of Okeechobee, FL; one step-daughter, Sue (Jerry) Powell of Hoopeston, IL; one step-son, Don (Peg) Cawthorn of Avon, IN; one sister, Marilene Romig of Williston, FL; 6 grandchildren; 12 great-grandchildren; 1 great-great-grandchild; 6 step-grandchildren and 6 step-great-grandchildren. He was preceded in death by his grandparents; parents and one sister, Marjorie Voyles. Bud worked in management at American Can in Hoopeston, until his retirement. He served in the United States Navy and was a past Commander at the Hoopeston VFW Buddy Egnew Post #4826, where he was a life member and had held every office. He was also a past alderman for the City of Hoopeston. Bud enjoyed fishing, hunting, spending time with his family and loved teasing his grandkids. A visitation will be held 5:00 – 7:00 P.M. Wednesday July 29, 2015 at Anderson Funeral Home 427 E. Main St. Hoopeston, IL. The funeral service will be held at 11:00 A.M. Thursday July 30, 2015 at the funeral home, with Pastor Micah Mobley officiating. Burial will follow in Floral Hill Cemetery in Hoopeston. Military rites will be accorded by the Hoopeston American Legion Post #384 and the Hoopeston VFW Buddy Egnew Post #4826. Memorials may be made to the Hoopeston VFW Buddy Egnew Post #4826 428 W. Orange St. Hoopeston, IL 60942.

The family of Charles E. "Bud" Miller created this Life Tributes page to make it easy to share your memories.