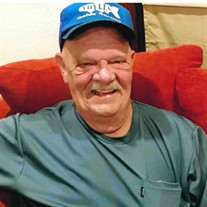 Charles H. “Herbie” Voyles, Jr., 73, of Wellington, IL, passed away on Sunday July 4, 2021, at Carle Foundation Hospital in Urbana, IL. He was born August 30, 1947, in Danville, IL, the son of Charles H. Voyles Sr. and Marilene (Miller) Voyles Romig. He married Nancy Deyo on December 20, 1969, in Colorado Springs, CO. She survives in Wellington. He is also survived by two daughters, Bonnie Voyles of Paxton, IL and Kelly Voyles-Rutledge of Gibson City, IL; his favorite furry child, Teddy; two sisters, Marsha Lockhart of Williston, FL and Amy (Butch) Boyd of Williston, FL; one brother, Dennis (Karen) Voyles of Cedar Key, FL; two grandchildren, Charlize and Brett Rutledge; and 3 furry grand-dogs, Daisy, Sammy, and Midge. He was preceded in death by his parents and two nieces, Melody Mencer and Bobby Jo “B.J.” Adams. Herbie drove a semi for over twenty years and later owned Spud’s Tire and Exhaust. He then worked at Hoopeston Foods until his retirement. He served in the United States Army where he served two tours during the Vietnam War. He was a lifetime member of the VFW where he had served as past Commander of VFW Post 4826. Herbie enjoyed playing cribbage with friends, mowing his lawn, and going fishing with his buddy, Roy. Cremation rites will be accorded. A visitation will be held 10:00 A.M. – 12:00 P.M. Friday July 16, 2021, at Anderson Funeral Home 427 E. Main St. Hoopeston, IL. The memorial service will follow the visitation and will begin at 12:00 P.M. Friday July 16, 2021, at the funeral home. Military rites will be accorded by the Hoopeston American Legion Post #384. In lieu of flowers, memorials may be made to the family.

The family of Charles H. "Herbie" Voyles, Jr. created this Life Tributes page to make it easy to share your memories.

Send flowers to the Voyles, family.