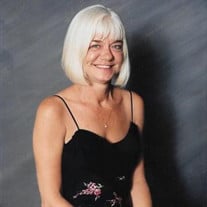 Cathy L Brown, 63, of Hoopeston, IL, passed away at 2:04 A.M. Thursday April 28, 2016 at her home in Hoopeston. She was born January 2, 1953 in Danville, IL, the daughter of Donald L. Kagels and Helen L. (Hendricks) Lyons. She married Gary L. Brown on February 6, 1993 in Danville, IL. He survives in Hoopeston. She is also survived by four children, Cherri (Clayton) Saltijeral of North Aurora, IL, Michele (James) Petty of Shorewood, IL, Rachel Brown of Bicknell, IN and Justin Kapoor of Danville, IL; three sisters, Linda Sue Staley of Peru, IN, Christine (Norbert) Schwer of Berrin Springs, MI and Glenda (Mike) Lomax of Tilton, IL; six grandchildren and many nieces and nephews. She was preceded in death by her parents; four sisters, Tonya Taylor, Julie Lomax, Rita King and Donna Kagels; one brother, Ronald Dowers; one niece, Beverly Lomax and two nephews, Tony Landon and Baby King. Cathy worked as a hairdresser, a supervisor at Schumacher’s, and later a CNA at the Hoopeston Nursing Home. She enjoyed drinking coffee with her friends. Cathy especially loved spending time with her grandchildren and family. Per her wishes she will be cremated. A visitation will be held 12:00 – 1:00 P.M. Tuesday May 3, 2016 at Anderson Funeral Home 427 E. Main St Hoopeston, IL. A memorial service will follow the visitation at 1:00 P.M. at the funeral home. No burial will be held. Memorials may be made in Cathy’s memory to the Heritage Health Therapy & Senior Living 423 N. Dixie Hwy Hoopeston, IL 60942.

The family of Cathy L Brown created this Life Tributes page to make it easy to share your memories.

Send flowers to the Brown family.