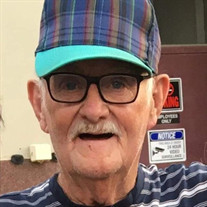 Carroll O. “Speed” Crozier, 81, passed away at 7:37 P.M. Saturday, September 26, 2020 at Carle Hoopeston Regional Health Center. He was born October 13, 1938, at home in New Hebron, IL, the son of Alva and Edna (Lawrance) Crozier. He married Elizabeth Hunter on January 20, 1965 in Danville. She preceded him in death. He is survived by one daughter, Cheryl (Terry) Mullen of Williamsport, IN; two sons, Jerry Ford of Aurora, IL and Carroll Crozier of Lafayette, IN; one brother, Charlie (Judi) Crozier of Hoopeston, IL; one grandson, Joe (Dara) Geyer of Belfast, NY; two great grandchildren, Daniel Geyer and Braeden Geyer of Belfast, NY and one special friend, Helen Compton. Along with his wife, he was preceded in death by his parents; four brothers, Harry, Jerry, Darrell, and Bill; his son, John; three grandsons; and one great grandson. Speed was a mechanic for several years before going to Hyster Lift Company for twenty years and then to Stokley’s for ten years. He was a picker and handyman. He enjoyed listening to and playing music, baking pies, hunting, catfishing, and attending family gatherings. A visitation will be held 5:00 – 7:00 P.M. Wednesday, September 30, 2020 at Anderson Funeral Home 427 E. Main St. Hoopeston, IL. A private family funeral will be held followed by a public graveside service at 1:00 P.M. Thursday, October 1, 2020 at Sugar Creek Cemetery in Stockland, IL with Pastor John Morris officiating. Memorials may be made to the American Heart Association 300 S. Riverside Plaza Ste 1200 Chicago, IL 60606-6637.

The family of Carroll O. "Speed" Crozier created this Life Tributes page to make it easy to share your memories.

Send flowers to the Crozier family.