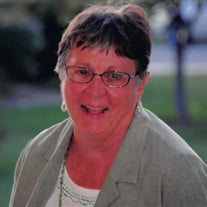 Carol Marjorie Oyler, 79, of Hoopeston, IL, passed away at 9:13 A.M. Sunday August 7, 2016, at her home in Hoopeston. She was born October 12, 1936, in Livingston County, IL, the daughter of Leslie and Vivian (Bollman) Metz. She married Larry D. Oyler on June 16, 1956 at the Hoopeston United Methodist Church. He survives in Hoopeston. She is survived by two daughters, Jane C. (David) Guthrie of Comfort, TX and Cindy J. Oyler of Austin, TX; one son, Tim Oyler of Indianapolis, IN; one sister, Beth (Dean) Bacon of Naples, FL; one brother, David (Dawn) Metz of Eagle Nest, NM; four grandchildren, Andy Pulido of Austin, TX, Elizabeth (Brian) Ellis of Austin, TX, Emily Pulido of Austin, TX and Leah Hollingsworth of Comfort, TX; one great-granddaughter, Emma Grace Ellis and several nieces and nephews. She was preceded in death by her parents and three sisters, Jean Hayden, Marilyn Sweeten and Lois Bury. Carol worked at Joan of Arc in Hoopeston and later worked part-time at Yergler’s, which later became Unger’s Jewelry. She attended the First Christian Church Disciples of Christ in Hoopeston. She was a member of the Hoopeston Historical Society, a life member of the Hoopeston Hospital Auxiliary and was also a member of the Hubbard Trail Country Club, where she enjoyed playing golf. Carol served as an election judge and enjoyed sewing for Border Mission. She also enjoyed playing tennis and bridge, bowling, watching the Illini and traveling. Carol especially loved her grandchildren and enjoyed spending time with them. Cremation rites will be accorded and a visitation will be held from 11:00 A.M. – 1:00 P.M. Thursday August 11, 2016 at Anderson Funeral Home 427 E. Main St. Hoopeston, IL. A memorial service will follow the visitation and will begin at 1:00 P.M. Thursday at the funeral home, with Rev. Thomas Cici officiating. No burial will be held. Memorials may be made to the First Christian Church Disciples of Christ 502 E. Main St. Hoopeston, IL 60942.

Carol Marjorie Oyler, 79, of Hoopeston, IL, passed away at 9:13 A.M. Sunday August 7, 2016, at her home in Hoopeston. She was born October 12, 1936, in Livingston County, IL, the daughter of Leslie and Vivian (Bollman) Metz. She married Larry... View Obituary & Service Information

The family of Carol Marjorie Oyler created this Life Tributes page to make it easy to share your memories.

Send flowers to the Oyler family.