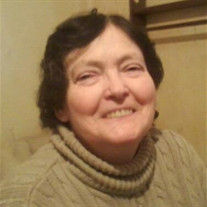 Carol S. Burkert, 57, of Hoopeston, IL, passed away at 9:36 A.M. Thursday October 15, 2015, at Carle Foundation Hospital in Urbana, IL. She was born March 27, 1958 in Rossville, IL, the daughter of John and Mary (Phillips) Burkert. She is survived by one son, John (Cheryl) Burkert of Hoopeston, IL; one step-son, Christopher Michaels; three sisters, Sandy (Mike) Eckersley of Hoopeston, IL, Nancy Ideus of Fisher, IL, and Veneta (Don) Odle of Williamsport, IN; two brothers, Don (JoAnn) Burkert of South Carolina and Terry (Sharon) Burkert of Fairborn, Oh; her companion, Jack Michaels; five grandchildren, John Allen, Faith, Alissa, & Destiny Burkert, and Madee Clingenpeel and ten nieces and nephews. She was preceded in death by her parents; one son, Dennis Thomas and one sister, Mildred Cunningham. Carol loved her dogs, riding her bike, and doing crafts. She was a loving mother, grandmother, and sister. She especially loved spending time with her family and her grandchildren were the light of her life. A visitation will be held 10:00 A.M. – 12:00 P.M. Tuesday October 20, 2015 at Anderson Funeral Home 427 E. Main St. Hoopeston. The funeral service will follow the visitation and will begin at 12:00 P.M. Tuesday October 20, 2015 at the funeral home with Pastor Micah Mobley officiating. Burial will be at the Rossville Cemetery in Rossville. Memorials may be made to the family C/O Anderson Funeral Home 427 E. Main St. Hoopeston, IL 60942.

The family of Carol S Burkert created this Life Tributes page to make it easy to share your memories.

Send flowers to the Burkert family.