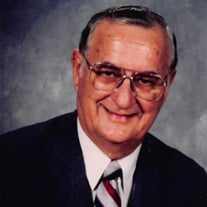 C.E. “Gene” Hughes, 90, of Rossville, IL, passed away at 7:01 A.M. Wednesday November 22, 2017 at Carle Hoopeston Regional Health Center. He was born October 21, 1927, in Alvin, IL, the son of James Gilbert and Laura Mary (Lareau) Hughes. He married Edna Mae Peak on December 24, 1946 in Danville, IL. She survives in Rossville, IL. He is also survived by one daughter, Maria Lynn (Michael) VerBeke of Rossville, IL; two sons, Steven E. (Debbie) Hughes and Larry Dean Hughes both of Rossville, IL; five grandchildren, Larry Keith Hughes, Dana L. (Justin) Beckner, Tracy (Marc) Jackson, Stacy R. (Jason) Sprague and Kelly (Ben) Hughes Walsh and six great-grandchildren, Lydia Ava and Jon Michael Sprague, Alyvia Grace and Tyson Marc Jackson and Melaina Paige and Mia Kate Beckner. He was preceded in death by his parents; one sister, Bernice; four brothers, Don, Oney, Kenneth and Glenn and three grandchildren. Mr. Hughes served two terms as Sheriff of Vermilion County, first elected in 1982 and re-elected in 1986; he retired in 1990. He served as deputy sheriff from 1956-1958 and was appointed Chief Deputy Sheriff in 1958; he served in that capacity until 1962 when he was appointed Director of Probation and Court Services, serving there until elected sheriff. Gene was a 1960 graduate of the University of Illinois Police Training Institute and served on their instruction staff in 1963 and 1964. He was past chairman of the Vermilion County Law Enforcement Planning Commission and Vice Chairman of the East Central Criminal Justice Commission and served as chairman of the Technical Advisory Committee to the Public Building Commission. Elected to three terms as President of the Illinois Probation and Court Services Association Inc. and past vice chairman of the Probation Services Council of Illinois. He was appointed to the Probation Standards Commission by the Illinois Supreme Court. In 1981, Governor Thompson appointed him to serve on the State Law Enforcement planning commission and to the council for the diagnosis and evaluation of criminal defendants. Gene was particularly proud that upon his completion of three two-year terms as President of the Illinois Probation and Court Services, Inc., the association established the “Gene Hughes” Award which is presented to the outstanding Probation Officer in Illinois each year, beginning in 1974. He was active in Republican politics and in the year 2000 he received the Uncle Joe Cannon Award for his outstanding and dedicated service to the Republican party. Mr. Hughes helped organize the Rossville Little League and served two terms as president. He also served four years as village treasurer, four years on the Rossville-Alvin Board of Education and was a member of the Rossville United Methodist Church. He enjoyed his family and being a grandfather and great-grandfather was special to him. Gene also enjoyed his career, politics, golf, sports, flower gardening, outdoor activities and having coffee and visiting with his many friends. A visitation will be held 10:00 A.M. – 1:00 P.M. Saturday December 2, 2017 at Anderson Funeral Home 427 E. Main St. Hoopeston, IL. A memorial service will follow the visitation and will begin at 1:00 P.M. Saturday December 2, 2017 at the funeral home, with Pastor Matt Stump officiating. Per his wishes, he will be cremated and burial will be held at a later date. In lieu of flowers, memorials may be made to the Rossville United Methodist Church 116 Maple St. Rossville, IL 60963 or the Vermilion County Sheriff’s Department 2 E. South St. Danville, IL 61832.

The family of C.E. "Gene" Hughes created this Life Tributes page to make it easy to share your memories.