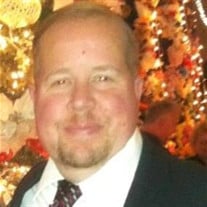 Bruce Franklin Leemon, 41, of Hoopeston, IL, passed away at 12:01 A.M. Friday November 24, 2017 at Heritage Health Therapy and Senior Living in Hoopeston, IL. He was born October 11, 1976, in Hoopeston, IL, the son of Charles E. and Dixie (Shoemaker) Leemon. He married Courtney Seymour on August 2, 2008. She survives in Hoopeston. He is survived by his parents; two daughters, Isabella and Sophie Leemon both of Hoopeston, IL; one sister, Laura (Jeff) Leemon-McGinnis of Westminster, CO; his paternal grandmother, Elaine Leemon of Hoopeston, IL; 6 nieces and nephews, Caleb, Hannah, Zoe, Jude, Luke and Mara Seymour and many cousins, Katrina and Twyla Watkins, Jeremy, Melanie, Holly and Matthew Shoemaker, John, Jeff and Adam Barten, Adam and Steve Winzenburger, Matt Payne and Cody, Wes, and Clint Leemon. He was preceded in death by his maternal grandparents, Glen and Thelma Shoemaker; paternal grandfather, Charles B. Leemon and three uncles, Kevin Payne, Scott Leemon and Max Watkins. Bruce worked for Champaign Danville Grain Inspection for 20 years. He was an active member of the Prairie Green Church of Christ where he was currently serving on the church board and was a past president of the board. He was also a member of the Hoopeston Boosters 4-H Club and coached his daughter Isabella’s t-ball and little league teams. Bruce won many awards showing cattle including having Grand Champion Heifer in the Junior Shorthorn Show at the 1989 North American International Livestock Exposition in Louisville, KY. A visitation will be held 4:00 – 7:00 P.M. Monday November 27, 2017 at Anderson Funeral Home 427 E. Main St. Hoopeston, IL. The funeral service will be held at 11:00 A.M. Tuesday November 28, 2017 at the funeral home, with Rev. Dustin Wells officiating. Burial will follow in Floral Hill Cemetery in Hoopeston. Memorials may be made in Bruce’s memory to the Prairie Green Church of Christ 278 N 2800 East Rd, Hoopeston, IL 60942.

The family of Bruce Leemon created this Life Tributes page to make it easy to share your memories.

Send flowers to the Leemon family.