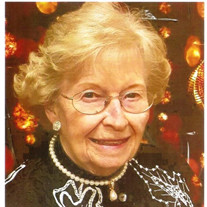 Brownie Virginia Kaag, age 94, formerly of Hoopeston, Illinois passed away peacefully on February 28, 2021 at Agrace Hospice Care in Fitchburg, Wisconsin surrounded by her loving family. Brownie was born November 19, 1926, the only child of Lawrence and Anna (Anderson) Lane. She was preceded in death by her husband of 67 years, Jim Kaag (1922-2014). Brownie graduated from Hoopeston’s John Greer High School in 1944 and started work in the office of the Food Machinery Corporation. Brownie and Jim married in 1946 and created an idyllic life on the farm for their two daughters, Cindy and Jane, and a home filled with traditional values and loving warmth. Brownie was the quintessential housewife and mother who worked hard and always put others first. She took pride in maintaining an immaculate home and lush garden, cooked hearty meals for the seasonal farmworkers, and was a loving caregiver to both her parents and in-laws, Russell and Freda Kaag, until their passing. Brownie was a Sunday School teacher, Girl Scout leader, member of Beta Sigma Phi and the neighborhood Jolly Dozen Club. Brownie will be deeply missed by her family: Daughter Cindy and her husband Gregg Prillaman of Annandale, Virginia and their two sons, Ben (Torie) of Clifton, Virginia and their four children, Jacob, Cameron, Ethan and Sophia; and Zachary (Juliet) of Clifton, Virginia and their two daughters, Mae and Adeline. Daughter Jane and her husband Gary Schaefer of Fitchburg, Wisconsin and their two sons, Jeff of Mequon, Wisconsin; and Peter (Laura) of Neenah, Wisconsin and their two sons, Oliver and Mason. Graveside services will be held Saturday, March 6, at 11:00 a.m. at Floral Hill Cemetery, Hoopeston, Illinois, where Brownie will be laid to rest next to her husband and parents. The family would like to thank the devoted staff of The Waterford Senior Facility where Brownie lived her last five years. Memorials may be made to the First Christian Church, 502 E. Main St., Hoopeston, IL 60942; or the American Legion, 502 E. Penn St., Hoopeston, IL 60942, both of which Brownie and Jim were life members.

The family of Brownie Virginia Kaag created this Life Tributes page to make it easy to share your memories.

Send flowers to the Kaag family.