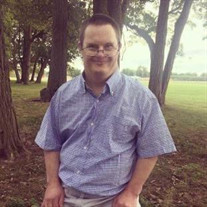 Brian Andrew Peterson, 54, of Carlinville, IL, formerly of Hoopeston, IL, passed away at 2:29 A.M. Friday April 22, 2022, at the Renaissance Care Center in Canton, IL. He was born April 24, 1967, in Danville, IL the son of Charles A. and Juanita (Pugh) Peterson. He is survived by three sisters, Paula (Jack) Fyans of Springfield, IL, Carla Seymour of Sydney, IL, and LeAnn (Steve) Fermon of Pleasant Plains, IL; one brother, Scott (Janie) Peterson of Chesterfield, IL; fourteen nieces and nephews; and twenty-seven great-nieces and great-nephews. He was preceded in death by his parents; his maternal and paternal grandparents; one nephew, Jerad Seymour; and second cousin, Justin Peters. Brian worked at the Hoopeston McDonald’s for over twenty-five years, until his retirement. He attended the Antioch Church of Christ in rural Rossville. He enjoyed attending the Special Olympics where he participated in swimming, bowling, volleyball, basketball, and track. He was a St. Louis Cardinals baseball fan and enjoyed attending games at Busch Stadium. Brian had an infectious smile especially when greeting people at McDonald’s. A visitation will be held 10:30 – 11:30 A.M. Monday May 2, 2022, at Anderson Funeral Home 427 E. Main St. Hoopeston, IL. The funeral service will follow the visitation and will begin at 11:30 A.M. Monday May 2, at the funeral home. Burial will follow in Floral Hill Cemetery in Hoopeston. In lieu of flowers, the family requests that memorials be made to the Carlinville Estates Activity Fund 1221 S. Plum St. Carlinville, IL 62626, the Special Olympics 1133 19th St. NW, 12th Floor, Washington, D.C., 20036-3604, or to the charity of your choice in Brian’s name.

The family of Brian Andrew Peterson created this Life Tributes page to make it easy to share your memories.

Send flowers to the Peterson family.