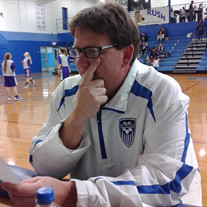 Brian James "Hodgey" Hodge, 47, of Hoopeston, IL, passed away at 12:06 P.M. Wednesday May 17, 2017, at Carle Foundation Hospital in Urbana. He was born August 24, 1969, in Danville, IL. He was raised by his grandparents, James "Hoppy" and Dorothy (Weaks) Hopkins. He married Carol Anderson on June 7, 1996 in Hoopeston. She survives. He is survived by two daughters, Jessica (Matthew) Lange and Janna (Tyler Moews) Hodge both of Hoopeston, IL; four grandchildren, Kaitlynn G. "Fred" Lange, Gabriella M. Zambello, Evan M. Lange and Henry R. Lange; father-in-law, Henry "Andy" Anderson of Hoopeston, IL; mother by love, Betty Richards and brother by love, Hank (Tammy) Hornbeck. He was preceded in death by his grandparents. Hodgey graduated from Hoopeston-East Lynn High School in 1987. During that time, he served as the manager of the 1985 and 1986 state boys basketball team. After graduation, he attended Western Illinois University and later returned to his hometown alma-mater to teach middle school history and geography. He also served as the middle school athletic scheduler for four years and later served as the district athletic director for two years. Hodgey was always there to lend a helping hand to any athletic program and was a past middle school basketball coach and scorebook keeper for the high school basketball team. He enjoyed golf, walking, mowing lawns and attending concerts, especially Def Leppard. Hodgey will be remembered by many as a coach, teacher, friend and mentor to students. Visitation will be held 2:00 - 6:00 P.M. Sunday May 21, 2017 at the Hoopeston Area Middle School gymnasium, 615 E. Orange St. Hoopeston, IL. The funeral service will be held at 1:30 P.M. Monday May 22, 2017 at the middle school gymnasium. Burial will follow in Floral Hill Cemetery in Hoopeston. Memorials may be made to the Brian Hodge Memorial Fund C/O Hoopeston Area High School, 615 E. Orange St. Hoopeston, IL 60942.

The family of Brian James "Hodgey" Hodge created this Life Tributes page to make it easy to share your memories.

Send flowers to the Hodge family.