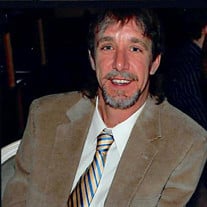 Bret “Fritter” Hufford, 50, of Lynnville, IN passed away at 3:51 A.M. Thursday, June 8, 2017 at St. Vincent’s Medical Center in Evansville, IN. He was born March 18, 1967 in Danville, IL, the son of Thomas and Joetta (Hughes) Hufford. He is survived by his mother, his fiancé Tracy Lang of Boswell, IN and her children Kobe and Kya; his sister Amy (Austin) Crawford; his two brothers, Tod (Kris) Hufford of Alvin, IL and Trent (Cammy) Hufford of Rossville, IL; his nieces, Kristen (Aaron) Tims, Emily Hufford (Dakota Patton), and Ashton Hufford (Eli Cousins); his nephews, Kyle Hufford (Chelsea Flint) and Ty Hufford, his great niece Rynlee Cousins and his great nephews, Trentyn Hufford and Ryylan Cousins and his loving pet, Yeller. He was preceded in death by his father, his grandparents, Leland and Ardith Hughes, Elmer and Madge Douglas, and Ray Hufford, and a niece Mary Alice Carter. Bret was a specialist engineer at Vectren Corp in Evansville, IN. He was a member of the Rossville United Methodist Church. He enjoyed Nascar Racing, spending time with his family, and tossing the ball with his dog. A visitation will be held 4:00 P.M. – 7:00 P.M. Monday June 12, 2017 at Anderson Funeral Home 427 E. Main St. Hoopeston. The funeral service will be held at 11:00 A.M. Tuesday June 13, 2017 at Anderson Funeral Home with Pastor Matt Stump officiating. Burial will be at Rossville Cemetery. Memorials may be made to the Rossville United Methodist Church or the donor’s choice.

The family of Bret Hufford created this Life Tributes page to make it easy to share your memories.

Send flowers to the Hufford family.