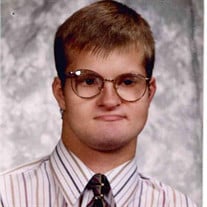 Bradley James Kelnhofer, 34, of Rural Hoopeston, passed away at 2:05 p.m. Friday February 26, 2016 at Presence United Samaritans Medical Center in Danville. Bradley, known to his family and friends as Bubba, was born October 12, 1981 in Watseka. Brad was the son of Greg and Brenda (Hurt) Kelnhofer of Rural Hoopeston, they survive. He is survived by one brother, Ben (Kim) Kelnhofer of Crest Hill, Illinois, three nephews, David Kelnhofer, Quinton Kelnhofer, and Landon Kelnhofer of Crest Hill, Illinois, and grandfather, Homer Kelnhofer of Savoy. He is also survived by many aunts, uncles, cousins, and extended family members who all loved him dearly. Brad was preceded in death by his maternal grandparents, Paul and Karen Hurt and his paternal grandmother, Elizabeth Kelnhofer. Brad attended Milford and Cissna Park Schools and graduated in 2001 through the Special Education System. He also attended the Day Training Program through the A.R.C. of Iroquois County. He enjoyed his 2 baths per day, swimming, and all kinds of music, but most of all, spending time with his family. Throughout his final days, Brad was cared for by many wonderful nurses, respiratory therapists, and certified nurse’s assistants at Presence Hospital. He was also cared for by two very special doctors, Dr. Bobat and Dr. Sekar. Bubba will be dearly missed by all. A visitation will be held from 11:00 A.M. – 1:00 P.M. Tuesday March 1, 2016 at Anderson Funeral Home, 427 E. Main Street, Hoopeston, IL. The funeral service will be held following the visitation at 1:00 P.M., with Terry Polson officiating. Memorials may be made in Bradley’s honor to the St. Jude’s Children’s Research Hospital, 501 St Jude Place, Memphis, TN 38105, The A.R.C. of Iroquois County, 700 E Elm St, Watseka, IL 60970, or to the Donor’s Choice.

The family of Bradley James Kelnhofer created this Life Tributes page to make it easy to share your memories.

Send flowers to the Kelnhofer family.