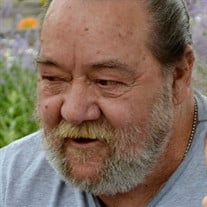 Bobby Ray Robinson, 70, of Rankin, IL passed away at 4:40 P.M. Thursday March 26, 2015 at his home in Rankin, IL. He was born May 29, 1944, in Danville, IL, the son of Luther Ray Robinson and Flora Ann (Nunn) Robinson. He is survived by daughters; Robin Robinson of Hoopeston, IL, Roberta Funk of Woodland, IL and Ronda (Gene) Breeden of Loda, IL; two brothers, Ronald(Sheila) Robinson and Donald (Sharon) Robinson both of Hoopeston ,IL one sister, Brenda Bynum of Danville IL.; 11 grandchildren; 27 great-grandchildren; several nieces and nephews and his significant other, Ida Mae Savage. He was preceded in death by his parents, two daughters, one son and one sister. Bobby was a truck driver. He enjoyed working on mowers, restoring old cars, guns and motorcycles. Per his wishes, he will be cremated and a memorial service will be held at 1:00 P.M. Saturday April 4, 2015 at the Wellington United Methodist Church in Wellington, IL, with Pastor Andy Maxwell officiating. No burial will be held. Memorials can be made to the Donor’s Choice.

The family of Bobby Ray Robinson created this Life Tributes page to make it easy to share your memories.

Send flowers to the Robinson family.