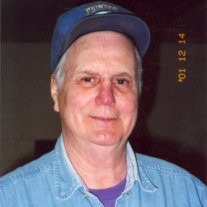 Billy E. “Jake” Stockton, 77, of Somerset, KY, formerly of Hoopeston, IL, passed away at 12:15 A.M. Thursday December 12, 2013 at the Heartland Nursing Home in Paxton, IL. He was born December 6, 1936, in Albany, KY, the son of Pearl Wade. He married Brenda K. Weston on September 13, 1958, in Ringgold, Georgia. She survives in Somerset, KY. He is also survived by two daughters, Connie (David) Dukes of Versailles, KY and Donna (Tom) Spear of Hoopeston, IL; one sister, Mona (John) Stockton of Albany, KY; five grandchildren, Zachary Spear of Redwood City, CA, Spencer (Shelly) Spear of Bryan, TX, Lance (Chris) Spear of Lisle, IL, Ellen Dukes of Portland, OR and Molly Dukes of Murfreesboro, TN and several nieces and nephews. He was preceded in death by his mother and one brother Sherman. Mr. Stockton was a maintenance worker at Food Machinery Corp. in Hoopeston for over thirty years, before retiring. He enjoyed visiting with others, never meeting a stranger and driving from town to town to find a good deal. Jake also enjoyed fishing and keeping up with his grandchildren. Per his wishes, cremation rites will be accorded and no services will be held. Memorials may be made in Jake’s memory to the American Cancer Society 2509 S. Neil St. Champaign, IL 61820-7744.

The family of Billy E. "Jake" Stockton created this Life Tributes page to make it easy to share your memories.

Send flowers to the Stockton family.