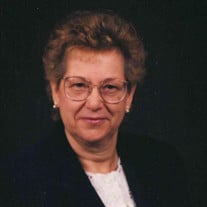 Betty E. Lithgow, 83, of Hoopeston, IL, passed away Friday, February 26, 2021 at 1:50 P.M. at Heritage Health Therapy and Senior Living in Hoopeston. She was born November 5, 1937, the daughter of Henry and Laura (Young) Hodel. She married John P. Lithgow on October 15, 1955. He preceded her in death on January 8, 2021. Betty is survived by four sons, Dennis (Becky) Lithgow of Harrison, AR, Dale (Penny) Lithgow of Hoopeston, IL, Doug (Becky) Lithgow of Huntington, IN, and Darrel (Kay) Lithgow of New Palestine, IN; two sisters, Doris Jacob of Westfield, IN and Brenda (Les) Kimmel of Yorkville, IL; one brother, Kenny (Jan) Hodel of Peoria, IL; one sister – in – law, Donna Lithgow of Gibson City, IL; eight grandchildren, Phil (Lisa) Lithgow, Ashley (Kris) Dukes, Matthew (Dawn) Lithgow, Alesha Berzyne, Adam (Hannah) Lithgow, and Alex, Nathan, and Brent Lithgow; five great grandchildren, James, Harrison, Jasper, Piper, Chandler, and one on the way; and many nieces and nephews. She was preceded in death by her parents and a brother, Larry Hodel. Betty worked at CBS and then Gulbranson as an organ technician. She later became a homemaker and helped her son, Dale, start Lithgow Automotive. She was a member of the Antioch Church of Christ where she served in many capacities and later attended Trinity Church in Watseka, IL and Brookville Road Community Church in New Palestine, IN. She enjoyed sewing, crocheting, gardening, keeping up with politics with John, and helping with the baby blanket charity at church. Most of all she enjoyed her children and grandchildren and got to meet two of her great grandchildren before she became ill with Alzheimer’s. A private family service will be held. Memorials may be made to the Alzheimer’s Association 225 N. Michigan Ave Floor 17 Chicago, IL 60601.

Betty E. Lithgow, 83, of Hoopeston, IL, passed away Friday, February 26, 2021 at 1:50 P.M. at Heritage Health Therapy and Senior Living in Hoopeston. She was born November 5, 1937, the daughter of Henry and Laura (Young) Hodel. She married... View Obituary & Service Information

The family of Betty E. Lithgow created this Life Tributes page to make it easy to share your memories.

Send flowers to the Lithgow family.