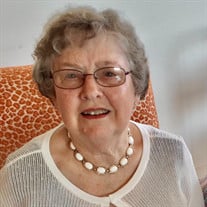 Betty Ruth Huffman, 93, of Hoopeston, IL, passed away at her home on June 22, 2021. She was born on October 23, 1927, to Floyd A. and Grace (Morgan) Starr. She married her husband, Leo, of 66 years on December 23, 1950. He preceded her in death. She was also preceded in death by her parents; one daughter, Rebecca Timmons; an infant sister, Florence Pauline; and three brothers, Floyd Jr., Paul, and Dale Starr. She is survived by three children, Kevin (Allan Duncan) of Maplewood, NJ, Amy (Rich) Hirschland of Alpharetta, GA, and Julie (Doug) Harper of Washington, IL; eleven grandchildren, Jen (Doug) Frederick, Chris (Carrie) Timmons, Madeline and Isabel Duncan-Huffman, Jeremy, Benjamin, Matthew, and Jonathan Hirschland, Megan (Bryson) Vanderheydt, Joseph and Jacob Harper; and eight great-grandchildren, Grace and Evan Frederick, Peyton, Paige, and Piper Timmons, and Carter, Brodie, and Cade Vanderheydt. Betty was a graduate of Danville High School in 1946 and upon graduation she worked in the office of a small loan company for 5 ½ years. She and Leo moved to Hoopeston after they wed in 1950 where they raised their family. She was active in the First Presbyterian Church where she represented the Greer Circle of the Presbyterian Church in the first thrift shop and spent many years volunteering for church activities. Betty enjoyed gardening, cooking, and baking, as well as collecting recipes. Most of all, she enjoyed spending time with her family. A memorial service to celebrate Betty’s life will be held at 2:00 P.M. Saturday July 10, 2021, at the First Presbyterian Church, 915 E. Orange St. Hoopeston, IL, with Rev. Wade Meranda officiating. Her family would appreciate memorials be made to the First Presbyterian Church, 915 E. Orange St. Hoopeston, IL 60942.

The family of Betty Ruth Huffman created this Life Tributes page to make it easy to share your memories.

Send flowers to the Huffman family.