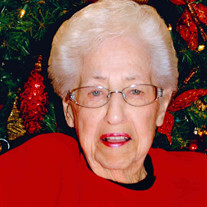 Betty June (Allison) Hollen, 87, of Hoopeston, IL, passed away at 5:30 P.M. Tuesday December 29, 2015 at Heritage Health Therapy and Senior Living in Hoopeston. She was born June 1, 1928, in Hoopeston, IL, the daughter of Charles Ishmeal and Flossie Mae (Skinner) Allison. She married George Edward Hollen on February 21, 1947 at the Hoopeston United Methodist Church. He preceded her in death. She is survived by two daughters, Angela Dee (Marvin) Miller of Centralia, IL and Linda Lee (Russell) Leigh of Hoopeston, IL; two sisters, Charlotte Lorraine Marko and Maxine Louise Garner both of Hoopeston, IL; 6 grandchildren, Rachel (Shaun) Gillins, Elizabeth (Michael) Silver, Jason Leigh, Andrew Miller, Jeffrey Miller and Meghan Miller; 3 great-grandchildren; 2 nieces, Sandi Thompson and Susie Baldwin and 3 nephews, Randy Garner, Stan Hollen and Steve Hollen. She was preceded in death by her parents and one grandson, Edward James Miller. Betty worked at Scranton’s, Schumacher’s and CBS until her retirement. She was a wonderful cook. She also had a beautiful singing voice and used to sing in the area when she was young. Betty loved sports and enjoyed cheering on the Cornjerkers, the Chicago Bears and the Chicago Cubs, while her husband was a Cardinals fan. She also enjoyed reading, playing golf and bowling. Betty loved her grandchildren and enjoyed spending time with them. There was always a lot of laughter when they were all together. A visitation will be held 9:00 – 11:00 A.M. Saturday January 2, 2016 at Anderson Funeral Home 427 E Main St. Hoopeston, IL 60942. The funeral service will follow the visitation and will begin at 11:00 A.M. on Saturday January 2, 2016, with Pastor Micah Mobley officiating. Burial will follow in the Floral Hill Cemetery in Hoopeston. Memorials may be made to the Hoopeston Area Sports Boosters c/o Anderson Funeral Home 427 E. Main St. Hoopeston, IL 60942.

Betty June (Allison) Hollen, 87, of Hoopeston, IL, passed away at 5:30 P.M. Tuesday December 29, 2015 at Heritage Health Therapy and Senior Living in Hoopeston. She was born June 1, 1928, in Hoopeston, IL, the daughter of Charles Ishmeal and... View Obituary & Service Information

The family of Betty June Hollen created this Life Tributes page to make it easy to share your memories.

Send flowers to the Hollen family.