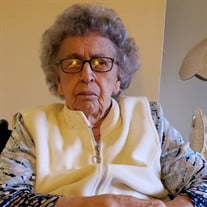 Betty L. “Granny” Eckert, 90, of Walker, MI, formerly of Hoopeston, IL, passed away on Sunday August 15, 2021, at Yorkshire Manor in Walker, MI. She was born December 14, 1930, in Tab, IN, the daughter of Charles B. and Lillie Mae (Turner) Hopkins Sr. She met Paul D. Eckert Sr. while he was in the service at Chanute Air Force Base and they later married on February 27, 1955, in Hoopeston, IL. He preceded her in death. She is survived by one daughter, Diane (Terry) Field of Birmingham, AL; one son, Danny (Pat) Eckert of Grand Rapids, MI; one brother, Doug Hopkins; two sisters-in-law, Lucina Haubert of Marion, OH and Judie Reynolds of Fort Mill, SC; 5 grandchildren, Jan Eckert, Mandy (Abraham) Sangha, AJ (Tara) Eckert, Tye (Kali) Eckert, and Travis (Cayla) Field; 12 great-grandchildren, Karsen, Caden, Avery, Brynnly, Emersyn, Isaac, Norah, Asher, Theo, Ivy, TJ, and Colton; and 7 nieces and nephews, Shelley, Chuck, Jeff, Bruce, Beth, Barry, and Paul. In addition to her husband, she was preceded in death by her parents; one sister, Shirley Crabtree; two brothers, James “Hoppy” Hopkins and Charles “JR” Hopkins; and seven nieces and nephews, Becky, Brian, Brad, Hodgey, Esther, David, and Carol. Betty graduated from John Greer (Hoopeston) High School in the Class of 1948 where she was also a cheerleader. She worked at A & P Grocery Store in both Hoopeston and Danville until her retirement. She later operated, with Paul, Eckert’s Root Beer Stand for five years and then began cleaning Community Bank and the telephone building. Betty was a member of the First Church of the Nazarene in Hoopeston where she was very active, serving many years as the Sunday School Leader, Treasurer, custodian, and on the Missionary Board. Both Betty and Paul served the Lord in many ways for many years. In her earlier years, she bowled in the Monday Night Bowling League at Pla-Mor Lanes in Hoopeston. She loved her classmates and served on the Class of 1948 Reunion Committee for many years. Betty was a Cornjerker fan, Illini fan, and an Ohio State Buckeye fan. A graveside service will be held at 11:00 A.M. Saturday August 28, 2021, at Floral Hill Cemetery in Hoopeston, IL, with Mike Stipp officiating. Memorials may be made to the First Church of God 1004 E. Orange St. Hoopeston, IL 60942.

The family of Betty L. Eckert created this Life Tributes page to make it easy to share your memories.

Send flowers to the Eckert family.