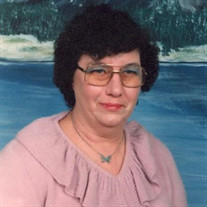 Bernadean Edwards, 84, of Rossville, IL, passed away at 8:07 A.M. Friday November 20, 2015 at Paxton HealthCare & Rehab in Paxton, IL. She was born October 11, 1931, in Rossville, IL, the daughter of Burns and Marguerite (Mackin) Lund. She married Thomas Edwards on June 30, 1984, in Rossville, IL. He survives in Rossville. She is survived by one daughter, JoAnna Bales of Crawfordsville, IN; three sons, Tony (Nancy) Norman of Hoopeston, IL, Ricky (Joan) Norman of Gainsville, FL and Ronald Norman of Rossville, IL; one sister, Marcia Crabtree of Mahomet, IL; two sisters-in-law, Sheila Lund of Rossville, IL and Lenny Lund of Missouri; nine grandchildren; seventeen great-grandchildren and seven nieces and nephews. She was preceded in death by her parents; two brothers, Harold and John Lund; one brother-in-law, Joe Crabtree; one infant nephew; one son-in-law, Alan Reed and also by Keith Bales. Bernadean worked at Howard Industries before her retirement. She enjoyed fishing, watching television, cooking and gardening. She especially enjoyed spending time with her family. A private service will be held. Per her wishes, following the service she will be cremated and burial will be held at a later date. Memorials may be made to Paxton HealthCare & Rehab 1240 N. Market St. Paxton, IL 60957.

The family of Bernadean Edwards created this Life Tributes page to make it easy to share your memories.

Send flowers to the Edwards family.