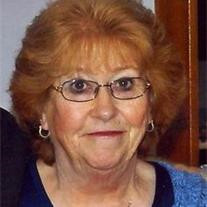 Barbara Sue Mathews, 69, of Hoopeston, IL, passed away at 1:45 P.M. Friday August 30, 2013 at Carle Foundation Hospital in Urbana, IL. She was born May 9, 1944, in Watseka, IL, the daughter of Russell and Evelyn (Lane) Holt. She married Don Mathews in Nashville, TN in 1967. He preceded her in death. She is survived by three daughters, Valarie (Mark) Hinkle of Hoopeston, IL, Jackie (Brian) Field of Hoopeston, IL and Stephanie (Warren) Crabtree of Naples, FL; one son, Don "Bub" (Shirley) Mathews of Muncie, IL; three sisters, Shirley Moore of Hoopeston, IL, Jeanne (Bob) Young of Lafayette, IN and Cheryl (Scott) Redden of Alvin, IL; one brother, John (Donna) Holt of Hoopeston, IL; 16 grandchildren; 28 great-grandchildren and many nieces and nephews. She was preceded in death by her parents and one nephew Nathaniel Parker. Barbara began working for G.E. and then went to work for John Deere. Later, she worked at Hoopeston Foods and H & R Block. She was a member of the West Side Nazarene Church for many years. Barbara enjoyed working in her flowers, watching old movies and spending time with her family and friends.

The family of Barbara Sue Mathews created this Life Tributes page to make it easy to share your memories.