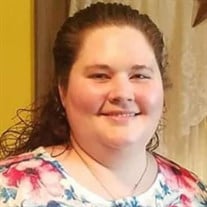 Ashley Deck, 35, of Rossville, IL, gained her angel wings on Tuesday July 6, 2021, at Carle Foundation Hospital in Urbana, IL. She was born April 1, 1986, in Danville, IL, the daughter of Lance and Tina (Boys) Deck. She is survived by her parents; one sister, Autumn (Pete) Herron of Rossville, IL; two nieces, Olivia and Elizabeth who were also her goddaughters; nephew, Gerd; godson, Dean; and goddaughter, Maeva. She is also survived by her brothers and sisters not by blood but by love, Donnie, Felicia, Tim (Danielle), and Stacy (Mike); many aunts, uncles, cousins, and friends who were like family. She was preceded in death by her maternal and paternal grandparents and her dog, Corky. Ashley worked as a CNA at the Danville hospital and later at Hawthorne Inn. She was a very family-oriented person, and they meant the world to her. Her nieces were her pride and joy, and she was her sister’s very best friend. She was a St. Louis Cardinals fan and enjoyed the couple of games that she attended. Ashley never met a stranger and would give the shirt off her back to anyone that needed it. She is going to be greatly missed by everyone who loved her. The family would like to express their appreciation for the care that was shown by the nurses and staff at Carle Hospital. Visitation will be held 10:00 A.M. – 12:00 P.M. Monday July 12, 2021, at Anderson Funeral Home 427 E. Main St. Hoopeston, IL. The funeral service will follow the visitation and will begin at 12:00 P.M. Monday at the funeral home, with Pastor Adam Wood officiating. Burial will follow in Rossville Cemetery in Rossville, IL. Memorials may be made to the American Lung Association or the National Alliance on Mental Health.

Ashley Deck, 35, of Rossville, IL, gained her angel wings on Tuesday July 6, 2021, at Carle Foundation Hospital in Urbana, IL. She was born April 1, 1986, in Danville, IL, the daughter of Lance and Tina (Boys) Deck. She is survived by her... View Obituary & Service Information

The family of Ashley Elizabeth Deck created this Life Tributes page to make it easy to share your memories.

Send flowers to the Deck family.