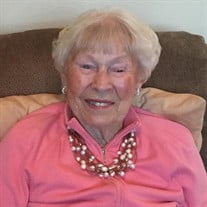 Artie "Peg" Wyss, 91, formerly of Cissna Park, IL, passed away on Tuesday October 6, 2020, at the Alta Vista Senior Living Community in Prescott, AZ. She was born October 12, 1928, in Hoopeston, IL, the daughter of Curtis and Ipha Brown. She married Jacob "Jack" Wyss in Cissna Park, IL, in 1948 and he preceded her in death in 2000. Peg also grieved the loss of a daughter, Janice Cunningham (Wyss) in 2002. She is survived by one daughter, Lana (Glenn) Sinn of Prescott, AZ; grandchildren, Andrew Sinn and Adam Sinn; and nieces and nephews. In addition to her husband and daughter Janice, she was preceded in death by her parents; sister, Margaret; and brothers, Curtis, Robert, Dale, Roy, Darrel, and Bill. After graduating from Hoopeston high school, Peg worked various jobs and became a homemaker. For many years she managed the lunch counter at the Livestock Sales Barn in Cissna Park bringing joy and delivering porkburgers, sodas, and hostess pies to countless folks with a joke or a smile. She enjoyed spending time with her niece Lisa and friends at Parkview (5th Street House). Peg and Jack moved to The Villages, FL, for retirement. Peg enjoyed 13 years of bowling, dancing, golfing, and making additional friends. She relocated to Prescott, AZ to be closer to her daughter, Lana, during her final years. Peg lived long enough to see her Chicago Cubbies win the World Series. What she appreciated the most was spending her time with friends and family being social. Peg’s family would like to thank the caretaker and hospice staff at Alta Vista for the respectful, kind care that they helped the family provide Peg, especially those who were with her during her final time. Specifically, thank you to Michelle, Amanda, and Judy for their loving care of Peg. Per her wishes, cremation rites have been accorded. A private graveside service will be held. A public visitation will be held 4:00 - 7:00 P.M. Friday October 30, 2020 at Anderson Funeral Home 427 E. Main St. Hoopeston, IL. We kindly ask that face coverings be worn and social distancing is maintained by those who attend the visitation. If you wish to honor her memory, please consider performing a quiet act of simple kindness for someone in your life or community. If desired, donations / memorials may be made in Peg's name to the Apostolic Christian Church, 1425 E. 400 N. Road, Cissna Park, IL 60924.

Artie "Peg" Wyss, 91, formerly of Cissna Park, IL, passed away on Tuesday October 6, 2020, at the Alta Vista Senior Living Community in Prescott, AZ. She was born October 12, 1928, in Hoopeston, IL, the daughter of Curtis and Ipha Brown. She... View Obituary & Service Information

The family of Artie "Peg" Wyss created this Life Tributes page to make it easy to share your memories.

Send flowers to the Wyss family.