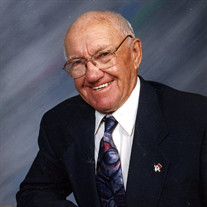 Arthur G. Smiley, farmer, farm manager, teacher, Boy Scout master and innovator died at 1:54 P.M. Sunday September 28, 2014 at Westminster Village in West Lafayette, Indiana. He was 94. Art was born in Rochester, Indiana to Glen and Edith (Haimbaugh) Smiley on May 16, 1920. He was the oldest of four children. His two brothers, Curtis (Lois Lee), West Lafayette and Everett (Catherine), Kokomo, Indiana survive. His sister, Louise preceded him in death. Soon after Art’s birth, the family moved to the Milford, Illinois area where Art started school in a one-room school house. Art graduated from Stockland High School before enrolling at the University of Illinois. Because of World War II, Art was placed on an accelerated undergraduate program. He graduated with a degree in Agricultural Economics in 1943. Art served as an officer in the U.S. Army where, among other responsibilities, he was the on-ship officer in charge of Army munitions being sent to Europe and German prisoners of war on the return trips coming back to the United States. A few weeks before their marriage, Art sent a telegram to his finance, Lois Jean Lawrence of East Lynn telling her that his leave was approved and to alert the minister. Art and Jean were married July 11, 1943. She survives. Art and Jean raised four children: Lawrence (Rachel), Indianapolis; John (Kendra), East Lynn; Ann Smiley-Oyen (Paul) Ames, Iowa and Wynn, Indianapolis. They have nine grandchildren and eleven great-grandchildren. After the war, Art and Jean moved back to East Lynn where Art taught high school biology, chemistry, physics and agriculture for eleven years. Art would later serve on the East Lynn school board, eventually being elected Board president. He earned his Master’s Degree from the University of Illinois in Ag Econ and continued to take post degree courses. Art left teaching to pursue his first professional love, farming. One of his life goals was to leave the land he and Jean owned in better condition than when they purchased it. Art was an innovative farmer, being among the first in Vermilion County to utilize diesel tractors for farming. He also researched more effective soybean production methods, designing and building a narrow row soybean planter, an innovation that is considered a standard soybean production method today. He briefly left farming full time to serve as the farm manager for Danville First National Bank. In addition to corn and soybean production, Art raised hogs early in his farming career. However, he enjoyed raising cattle the most, feeding his herd twice a day until he was in his mid 80s. He continued to help with farming duties until he was 92. Art volunteered throughout his life. He started East Lynn Boy Scout Troop #48 in 1958 and served as Scout Master. In 1960 he was part of the leadership team heading Vermilion County’s contingent to Colorado Springs celebrating BSA’s 50th anniversary. Highlighting his service to the East Lynn community, Art and Troop 48 sponsored what would become popular weekly swim lessons for area kids and adults at the Danville YMCA with instructor “Teach” Nelson. Art served as a Sunday school teacher at the East Lynn United Methodist Church for more than 40 years, was a board member for the Central Illinois evangelistic organization “Closer to God Today” and served on an advisory board for the United Methodist Church Aldersgate conferences. Always the learner, Art joined the Illini Soaring Club in his 50s, eventually earning his private pilot’s license. Twenty years later, in his 70s, he tried something a little more grounded, taking piano lessons for the first time including performing in recitals with fellow and much younger students including a couple of his grandchildren. He was a member of Toastmasters. Memorial contributions may be made to the East Lynn Community Fellowship P.O. Box 146 East Lynn, IL 60932.

The family of Arthur Glen Smiley created this Life Tributes page to make it easy to share your memories.

Send flowers to the Smiley family.