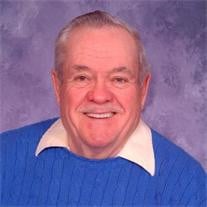 Arthur Lee Gonzalez, 77, of Rossville, IL, passed away at 5:56 P.M. Thursday July, 25, 2013 at Carle Foundation Hospital in Urbana, IL. Lee was born August 18, 1935 in Paxton, IL, the son of Joseph and Hannah (Hansen) Gonzalez. He married Bonnie Lou Bennett on April 24, 1954, at the Central Church of Christ in Effingham, IL. After fifty years of marriage, she preceded him in death on May 3, 2004. He is survived by two daughters, Gail (Chapman) Jones of Madera, CA and Deanna (Terry) Misner of Rossville, IL; two sons, Dennis Gonzalez and Dana Gonzalez both of Rossville, IL; six grandchildren, Johnny Bray, Emily (Ben) Catron, Tyler Misner and Rachel, Kendra and Reagan Gonzalez; one great-grandson, Cooper Catron and several nieces and nephews. He is also survived by his friend, Leona Marshall of Rossville, IL. He was preceded in death by three brothers, Harold, George and Alvin and two sisters, Margaret and Josephine. Lee worked at Food Machinery Corporation in Hoopeston, before retiring after thirty plus years of service. He was a volunteer fireman for the Rossville Fire Department, where he currently was serving on the board and had also served as past Fire Chief. He was an outdoorsman, enjoying fishing, camping with his family and working in his yard, where he enjoyed feeding the birds and squirrels. Lee also enjoyed woodworking and tinkering with cars.

The family of Arthur Lee Gonzalez created this Life Tributes page to make it easy to share your memories.