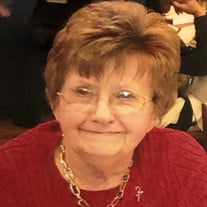 Anne M. Meyer Rhoades, 84, of Hoopeston, IL, passed away at 4:25 A.M. Saturday October 10, 2020 at the Gibson Area Hospital Annex in Gibson City, IL. She was born December 21, 1935, in Milford, IL, the daughter of John F. and Minnie (Schaumburg) Tubbs. She married Verlin Meyer and he preceded her in death. She later married Gordon Rhoades and he also preceded her in death. She is survived by 5 nieces and nephews, Becky (Tom) Heinrich of Dwight, IL, Mike (Kebby) Knake of Hoopeston, IL, Don Knake of Jackson, TN, Mark (Marge) Rosenboom of Crescent City, IL, and Sue Medlen of Tucson, AZ and numerous great-nieces and nephews. She was also preceded in death by her parents; two sisters, Lois Rosenboom and Mary Knake; and two nephews, David Knake and Dennis Knake. Anne began working as the secretary for Farmers Pioneer Insurance Company in 1962 and later became the manager. She continued working there until her retirement in 1998. She was a member of the St. Peter’s Lutheran Church in Crescent City but most recently attended the Hoopeston United Methodist Church. She served as a volunteer at the Hoopeston Multi Agency and Iroquois County Historical Society and was a member of the DAR and Women Making a Difference. She loved reading, traveling to Civil War sites, and collecting antiques. Per her wishes, she will be cremated. A public visitation will be held 9:30 A.M. – 11:00 A.M. Saturday October 17, 2020 at Anderson Funeral Home 427 E. Main St. Hoopeston, IL. A private memorial service and burial will be held. In lieu of flowers, memorials may be made in Anne’s memory to the Grant Township Food Pantry 525 S. Market St. Hoopeston, IL 60942 or the Save the Lorraine Foundation P.O. Box 247 Hoopeston, IL 60942.

The family of Anne M. Meyer Rhoades created this Life Tributes page to make it easy to share your memories.

Send flowers to the Rhoades family.