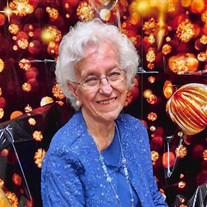 Anna Lee Leathermon, 94, of Hoopeston, IL, formerly of the Locust Grove area and Boswell, IN, passed away at 5:50 A.M. Tuesday September 19, 2017 at Heritage Health Therapy and Senior Living in Hoopeston, IL. She was born July 9, 1923, in Milford, IL, the daughter of Virgie Marie Cook and George Jessie and step-daughter of Clarence Maxwell. She married Robert L. Leathermon on August 2, 1942, at the Christian Church parsonage in Boswell, IN. He preceded her in death. She is survived by three daughters, Sue (Richard) Samet of Hoopeston, IL, Susan Kuhn of Frankfort, IN and Elizabeth Ann (Joe) Budreau of Wolcott, IN; one brother, Bobby Jessy of Columbus, GA; one sister-in-law, Betty Jessie; 7 grandchildren, Jeff, Scott and Tim (Susan) Samet, Lesley (Keith) Doane, Douglas Kuhn, Sam (Jaci) Kuhn and Seth Budreau; 9 great-grandchildren, Olivia, Lillian, Amelia, Emily, Georgia, and Henry Samet, Peter Doane, Marlee and Kiley Jo Kuhn; and several nieces and nephews. She was preceded in death by her parents; one sister, Arlene Lowe; one brother, George “Buster” Jessie; one sister-in-law, Hanna Jessy; and one son-in-law, Todd Kuhn. Anna was a homemaker. She was a member of the Boswell Church of Christ, where she was very active, serving in many capacities. She was a volunteer for several organizations and enjoyed taking friends to their doctor’s appointments, grocery shopping and to the senior center. Spending time with her loved ones was one of Anna’s greatest enjoyments. She loved playing games with her grandchildren and great-grandchildren and playing euchre with her friends. A visitation will be held 10:00 A.M. – 12:00 P.M. CST on Saturday September 23, 2017 at Anderson Funeral Home 427 E. Main St. Hoopeston, IL. The funeral service will follow the visitation and will begin at 12:00 P.M. CST on Saturday at the funeral home, with Pastor John Morris and Pastor Sue Spurlin officiating. Burial will follow in Locust Grove Cemetery in rural Ambia, IN. Memorials may be made to Title 5 Star Industries for Amelia Marie Samet C/O Title 5 Star Industries, 1927 Twin Oaks, DuQuoin, IL 62832.

Anna Lee Leathermon, 94, of Hoopeston, IL, formerly of the Locust Grove area and Boswell, IN, passed away at 5:50 A.M. Tuesday September 19, 2017 at Heritage Health Therapy and Senior Living in Hoopeston, IL. She was born July 9, 1923, in Milford,... View Obituary & Service Information

The family of Anna Lee Leathermon created this Life Tributes page to make it easy to share your memories.

Anna Lee Leathermon, 94, of Hoopeston, IL, formerly of the Locust...

Send flowers to the Leathermon family.