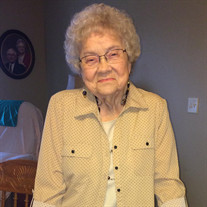 Alice May (Voyles) Trueblood, 86, of Hoopeston, IL, passed away at 7:54 P.M. Wednesday August 16, 2017 at Carle Foundation Hospital in Urbana. She was born December 19, 1930, in Orleans, IN, the daughter of Otis and Emma (Crawford) Voyles. She married Harold W. Trueblood on April 10, 1948 and they enjoyed 63 years of marriage, before preceding her in death. She is survived by one daughter, Jacqueline (Paul) Griner of Boswell, IN; two sons, David (Patty Anderson) Trueblood of Covington, IN and Gary (Deb) Trueblood of Attica, IN; 6 grandchildren, Mike, Noah, Lisa, Nathan, and Brian Trueblood and Joe Sheehan; 14 great-grandchildren; one great-great-grandchild; and several nieces and nephews. She is also survived by her lifetime friend and caregiver, Pam Barron. She was preceded in death by her parents; two sisters, Naomi Sollars and Helen Thompson; and four brothers, Herb, Bill, Ray and Bob Voyles. Alice was a school cook at Ambia school for many years. She was a member of the Ambia Christian Church and later became a member of the United Methodist Church of Ambia. Alice was an avid St. Louis Cardinal’s fan. She enjoyed going to their home at Kentucky Lake, visiting The Little Nashville Opry in Nashville, IN and loved spending time with her family. A visitation will be held 3:00 – 6:00 P.M. CST Sunday August 20, 2017 at Anderson Funeral Home 427 E. Main St. Hoopeston, IL. The funeral service will be held at 10:00 A.M. CST Monday August 21, 2017 at the funeral home, with Pastor Clint Fink officiating. Burial will follow in Floral Hill Cemetery in Hoopeston. Memorials may be made to the Honor Flight at Boswell Grade School 414 W. Main St., Boswell, IN 47921.

Alice May (Voyles) Trueblood, 86, of Hoopeston, IL, passed away at 7:54 P.M. Wednesday August 16, 2017 at Carle Foundation Hospital in Urbana. She was born December 19, 1930, in Orleans, IN, the daughter of Otis and Emma (Crawford) Voyles.... View Obituary & Service Information

The family of Alice May Trueblood created this Life Tributes page to make it easy to share your memories.

Send flowers to the Trueblood family.